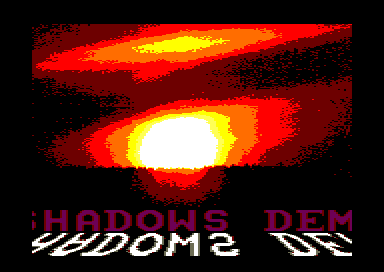 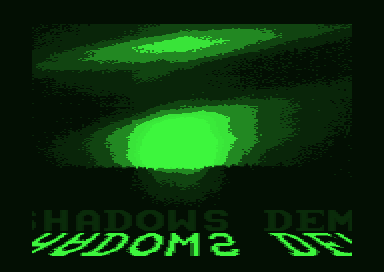 This was another attempt at creating a natural phenomena on my CPC! The scrolltext in this demo throws a shadow on the ground before it. This shadow is the mirrored text in a pre-calculated parallax scrolling. Unfortunately this demo overexert the power of the small CPC and thus this demo just runs with 25 frames/ second.

The calculation for this shadow was rather simple. Since I already had done a lot with vector graphics I just used my routines for rotating and transforming 3d-coordinates into 2d coordinates for the two dimensional screen to pre-calculate the zoom factor for the individual screen lines of the mirrored text.

I actually created a program that wrote the code for these screen lines automatically. The only thing I had to do after the code was written, was to clear it up a little. Replace LD BC,&0001 by LD C,&01 (when the B register was already zero) to increase the speed a little.

The background picture was a scan of a photo my dad took of a mountain close by. I scanned it using a hand scanner and converted it to the CPC with a program I wrote on my Acorn Archimedes. I've transferred the picture to the CPC using a RS232 link to the Archimedes.

For some reason I cannot fathom anymore I chose those weird colors for the shadow text. Probably I used those colors, because the background was already black and thus I couldn't use this typical shadow color anymore...

This demo was released as a part of the Divine Megademo. It also includes a cheat part (like all of my part in the Divine Demo). To activate it you have to press the keys "J", "U", "M" and "P" at the same time. 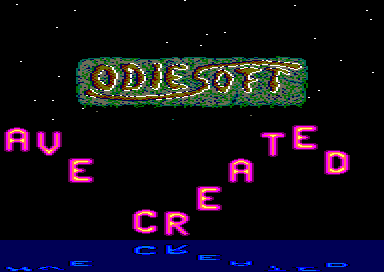