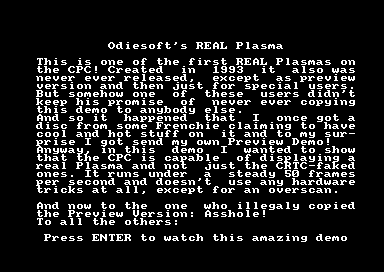 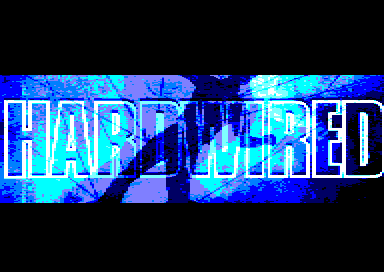 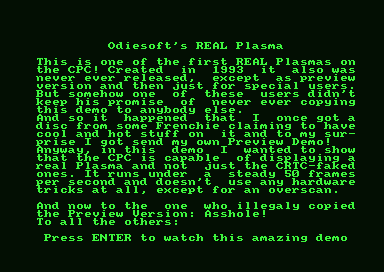 I've created that demo in 1993. During that time the Amiga freaks tried to push the limits of the 68000 processor further and further in order to find out what the Amiga is capable of. An effecs called Plasma was very popular during that time and there was almost no demo without it.

The Plasma was some sort of alpha blending effect were a twodimensional mass of translucent goo was wobbling on the screen. The Amiga was fast enough to display such an effect in realtime and with the different bitmaps it was no problem to create a translucent effect. But how could I create a similar effect on the CPC?

But it turned out that this effect was very easy to accomplished. Once I've thought about it a litte I came up with a easy and really simple solution: I didn't have to repaint the whole goo on every frameflyback. I just had to clear the parts of the goo that weren't needed anymore on the next screen and add parts to the goo at the places where it was supposed to move.

So I created two different sine waves for the right and the left part of the goo and then I created a program that calculated the difference of the right and left borders between one frame and its subsequent frame. Then the program just had to erase and fill the differences between these two frames with an XOR command. And that's it.

The only thing I had to make sure was that the motion of the goo wasn't this substantial that the program had to change too many bytes on the screen, so that it took more than one frameflyback. But this wasn't really hard, I just had to keep the sine-waves small enough that this case was never able to happen.

The Hardwired picture was converted from an Amiga demo. My brother ripped the picture and I've transfered it to the CPC via a RS232 link to my Acorn Archimedes. I had written a small program on the Archimedes that could do simple transformations of pictures with more than 16 colors to a CPC Mode 0 picture with 16 colors. The program wasn't really fancy, but it was enough to do some nice conversion of Amiga or Archimedes screens.

The link program between the Acorn RS423 and the RS232 of the CPC was very slow. It took almost half an hour to send a complete picture from one to the other. But there was no other way to do this at this time. Face Huggers DOS Copy program wasn't yet written at that time...

Since I was planing to create a Megademo (working title of that demo was "Dangerous") I didn't release the Plasma officially. I just sent copies to some friends of mine telling them not to give them away to anybody.

My surprise was big when I once got send a disc from one of my French contacts with my own Plasma Demo on it. My friend told me that there was a cool new effect on the disc, even though he didn't knew who had created it. I wasn't really very happy about that. After that incident I only sent out previews to Antoine and Mage, my collaborators in the Divine Mega Demo.

The Plasma was officially published in the Divine Mega Demo where there was another Plasma Effect by Antoine who claims to have been the first CPC programmer to have written such an effect.

I believe that I was the first, since I had my program in the drawer of my desk for about one or two years. But since both our Plasmas use totally different techniques I think it is safe to say that we both were the first to implement these effects - everyone in his own way! 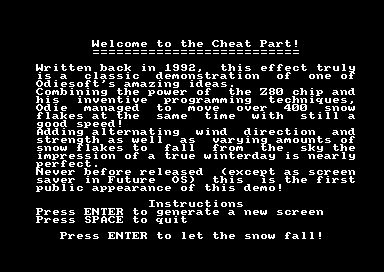 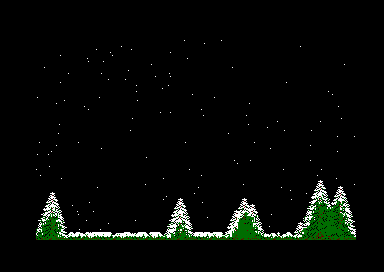