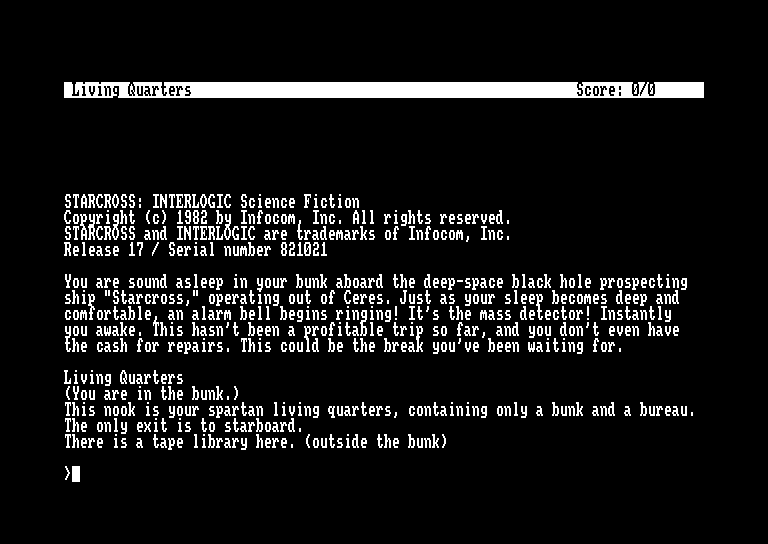 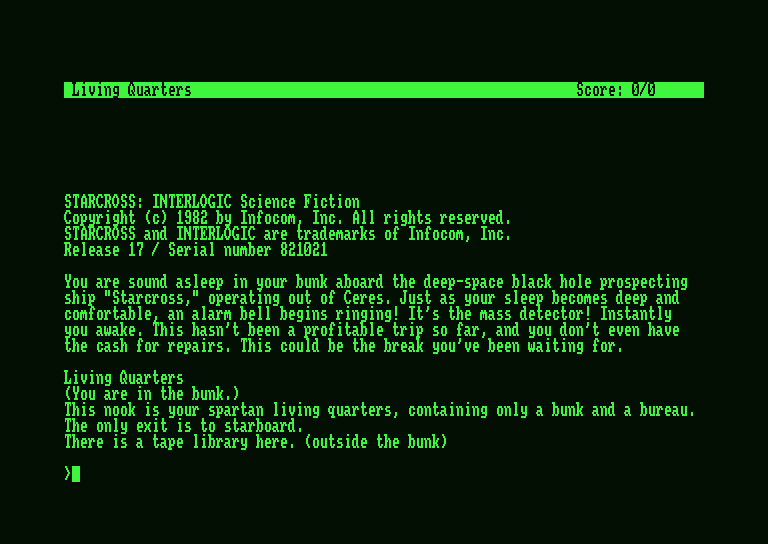 AGAIN
STARCROSS will respond as if you had repeated your previous sentence.

BRIEF
This commands STARCROSS to fully describe only newly encountered rooms and objects. Rooms already visited and objects already seen will be described by printing the room name and the object names only.

INVENTORY
STARCROSS lists your possessions. You may abbreviate INVENTORY by typing I.

LOOK
STARCROSS describes your surroundings in detail. You may abbreviate LOOK by typing L.

QUIT
This gives you the option to quit playing. If you want to save your position, first read the instructions under SAVING A GAME POSITION. You may abbreviate QUIT by typing Q.

RESTART
This ends the game and starts the game over from the beginning.

RESTORE
Restores a game position you saved with the SAVE command.

SAVE
Saves a game position on your storage diskette.

SCORE
STARCROSS shows your current score with the number of moves you have made, and your rank. (Your rank is your rating as a professional STARCROSS player and is based of the number of points you have. )

SCRIPT
This command assumes you have a printer. It commands the printer to begin printing a transcript of your game session.

SUPERBRIEF
This command tells STARCROSS to show you only the name of the room you have entered, and no other information. It is briefer than BRIEF.

UNSCRIPT
This command stops your printer from printing.

VERBOSE
This command tells STARCROSS to show you a long description of the room and the objects in it whenever you enter a room.

VERSION
STARCROSS responds by showing you the release number and serial number of your copy of the game.

WAIT
This command causes time in the game to pass. Normally, between moves, no time is passing as far as STARCROSS is concerned -you could leave your computer, take a nap, and return to the game to find that nothing has changed. WAIT is used when you want to find out what will happen in the game if you do absolutely nothing while time passes. For example, if you encounter an alien being, you could WAIT and see what it will do.