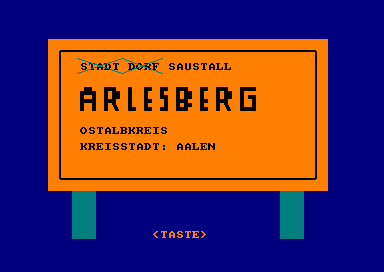 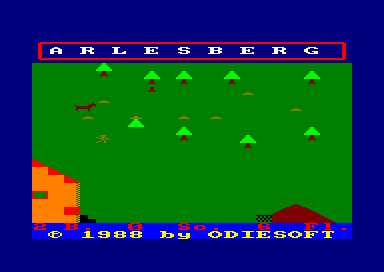 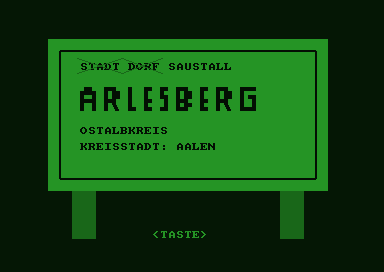 The story for this game is quite funny. When I was attending high school weâve had a farmersâ son in our class. Everybody teased him for being a farmersâ son - Teens are cruel. But he also fought back very well.

The others kept calling him names to tease him and as soon as he started to go after them they ran away and tried to avoid him for the rest of the day. It was always great fun to see how much he got angry over such a small thing.

One day we came up with the idea to create a computer game where one can play this farmersâ son doing his daily work at the farm. Since I was the only person with some programming skills I started to create a very simple BASIC game.

During that time I was also working on my version of the popular game "Ghostbusters", but in the end "Arlesberg" was my first finished game ever. "Ghosthunters" was finished a few weeks later...

So what do you have to do in "Arlesberg"?

Since the instructions are in German hereâs the short version: Youâre the farmer "Dschikdibok" and your quest is to collect all the poo-poo of the cow "Berta". You have to pick up the cow pats and bring them to the dung hill on the bottom right of the screen. You can only pick up one cow pat at a time and every time you drop the cow pat off at the bridge of the dung hill the cow "Berta" gets faster with producing this valuable organic fertilizer.

When more than 10 cow pats are spread across Dschokdiboksâ farm the game is over.

So the game was pretty simple, as was the graphics and the sound. But so what, it was my first game and it made quite an impression, especially on that farmersâ boy: He wouldnât talk to me for two weeks or so. But afterwards he was completely cured. You could say "Dschokdibok" to him as often as you wanted, he didnât even twitch with the eyelid.

This first contact with this psychological desensitation technique was one of my first (unintended) steps towards my future profession (becoming a psychologist).

An interesting note aside is that even though this game was one of my first productions it already demonstrated my disposition to grandiose effects and introductions. Even though the game was already finished Iâve spent some time on creating a movie-like introduction to the game.

The method was of course simple and the look was crude, but it was the beginning of a long career of imaginative software effects...