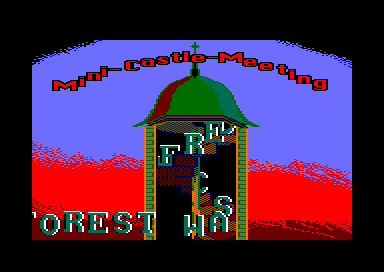 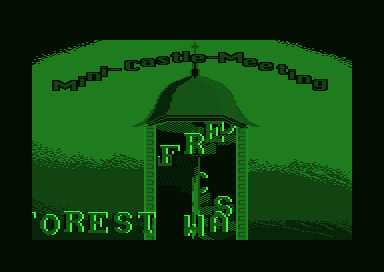 The Mini Meeting Demo was the only true coproduction of the Hajemara Team (HJT) ever!

It was created during a meeting of the members of the HJT in early 1993. I remember that it was freezing cold outside and Marabu had to put a lot of coal and bricks of wood into the oven to keep our spirits up and our fingers unfrozen!

I don't really remember where I got the idea from to have the characters of the scrolltext jump down the stairs of this tower. But since I have some demos with jumping characters and some unfinished stuff with characters that jump, turn and twist I think that this was just a regular act of creativity of me.

The tower means to resemble the turret that Marabu has on his Mansion. By the way:

The picture was painted by Marabu, the Founder and Humble Leader of the HJT Himself! Kangaroo Musique created the sound and Crittersoap painted the font (which incdentially looks very much like when you draw a block font in mode 1 and then switch to mode 0... strange). Oh well, and yours truly did all the programming work - as usual...

The program itself wasn't such a big thing. The characters are regular byte-by-byte sprites, that means that they are not painted dot by dot, rather byte by byte. Since a byte in Screen Mode 0 contains two dots you can see black borders here and there within the characters. That an artifact (error) of this method. I chose this method, because it's a lot faster than painting a sprite dot by dot.

To make the characters overlap and be in front or in the back of one another I just had to paint them in the right (predefined) order. To make them disappear behind a part of the staircase (and also the roof of the tower) I used direct addressing sprites (for more speed). That is a part of the roof and of the stair case is repainted every time all the characters were set on the screen.

The demo was released as stand alone demo. Later I added a hidden cheat part and re-relased the demo as part of the Divine Megademo. I got heavily criticised by some users for re-relasing it in the Divine Demo.

The primary reason for doing this was that I had the feeling that this small stand alone demo wasn't really distributed that much and I was hoping to reach more people by adding it to the Divine Mega Demo.

The second reason was that I used this demo as carrier for the hidden Flying Ghostwriter part. Since I had furnished all the other parts with hidden demos already and I still had this supposed-to-be hidden part lying at home I shorthandedly picked this Mini Meeting Demo as the best candidate for another hidden part.

By the way, most of the other re-relased Demos in the Divine Mega Demo were adjusted so that they were using the new features (mainly the 4096 colors) of the CPC+ or they were adapted to run on the ASIC CRTC of the CPC+. For example the Shining Christmas Demo didn't run on the Plus and the Texture Mapping was adapted to the 4096 Colors of the Plus. 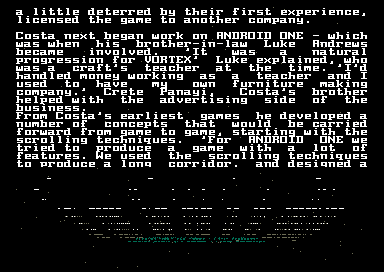