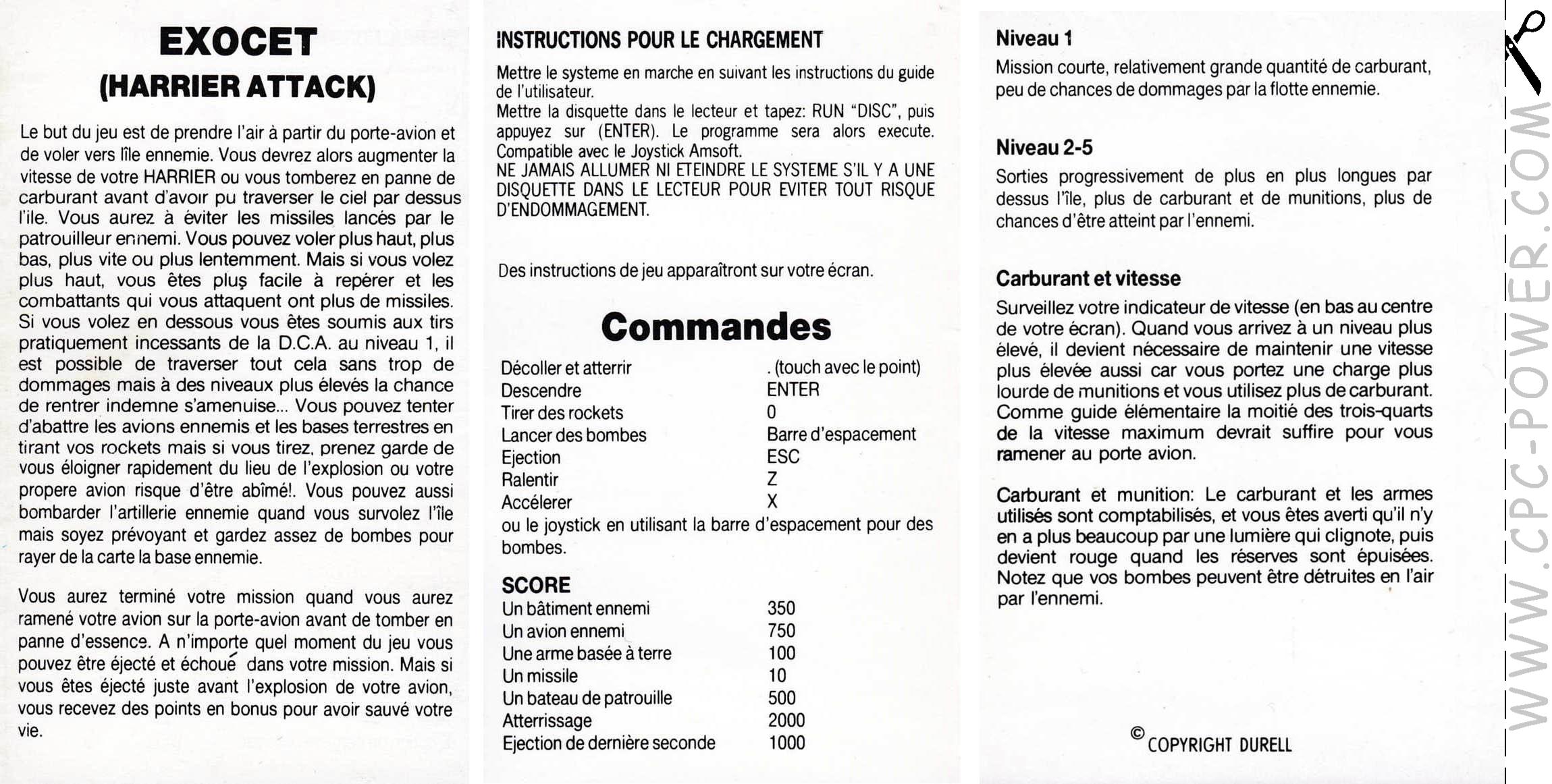 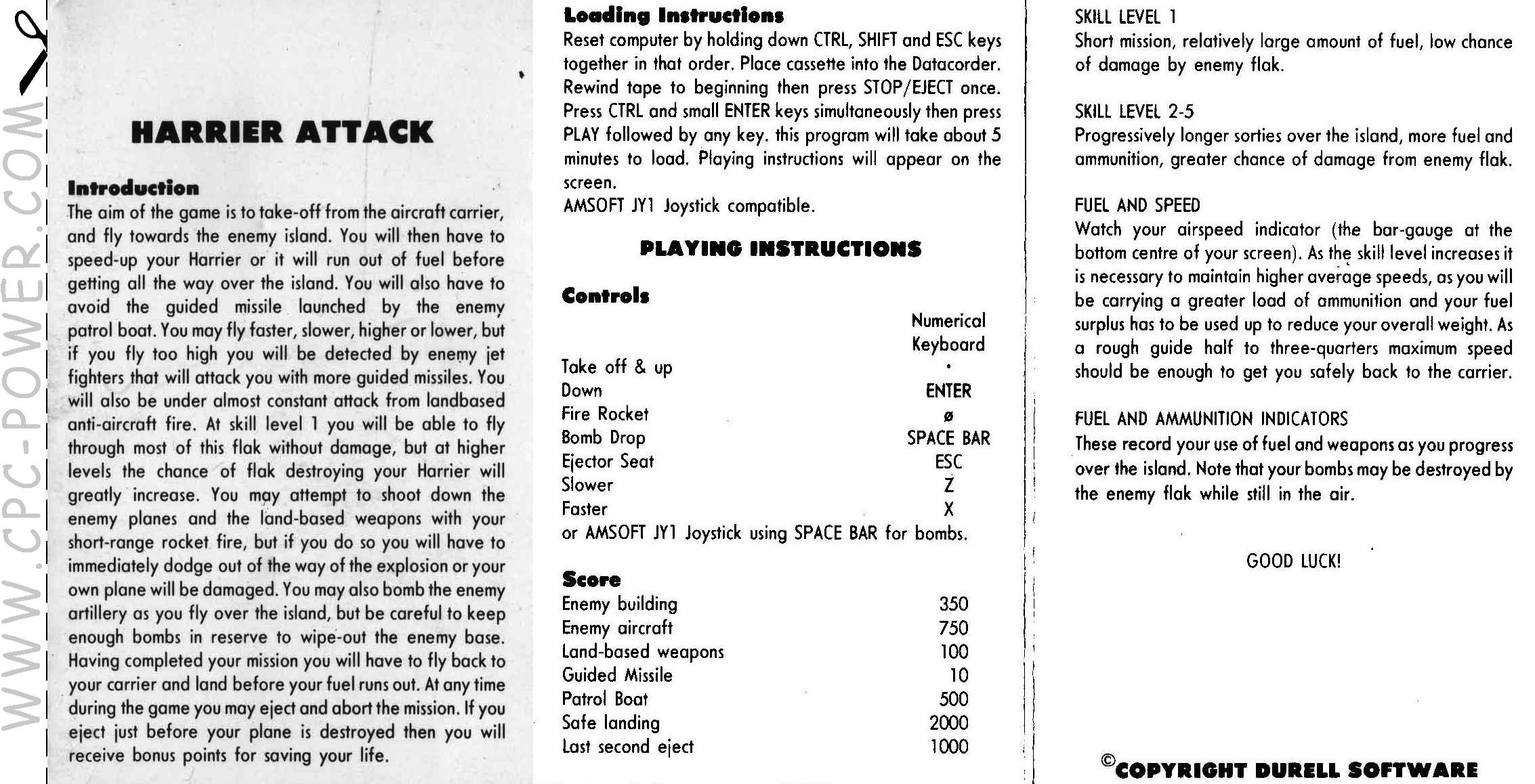 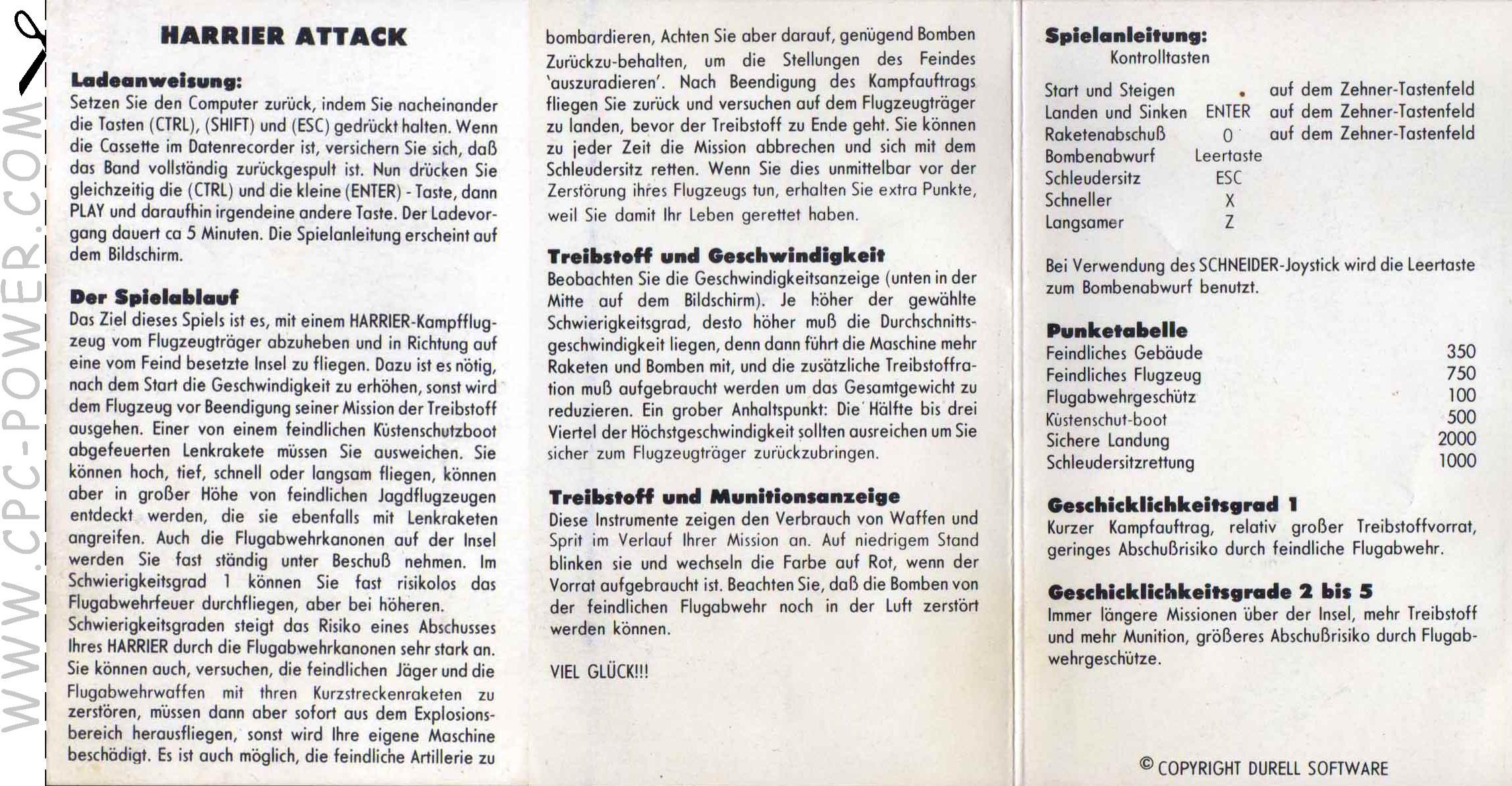 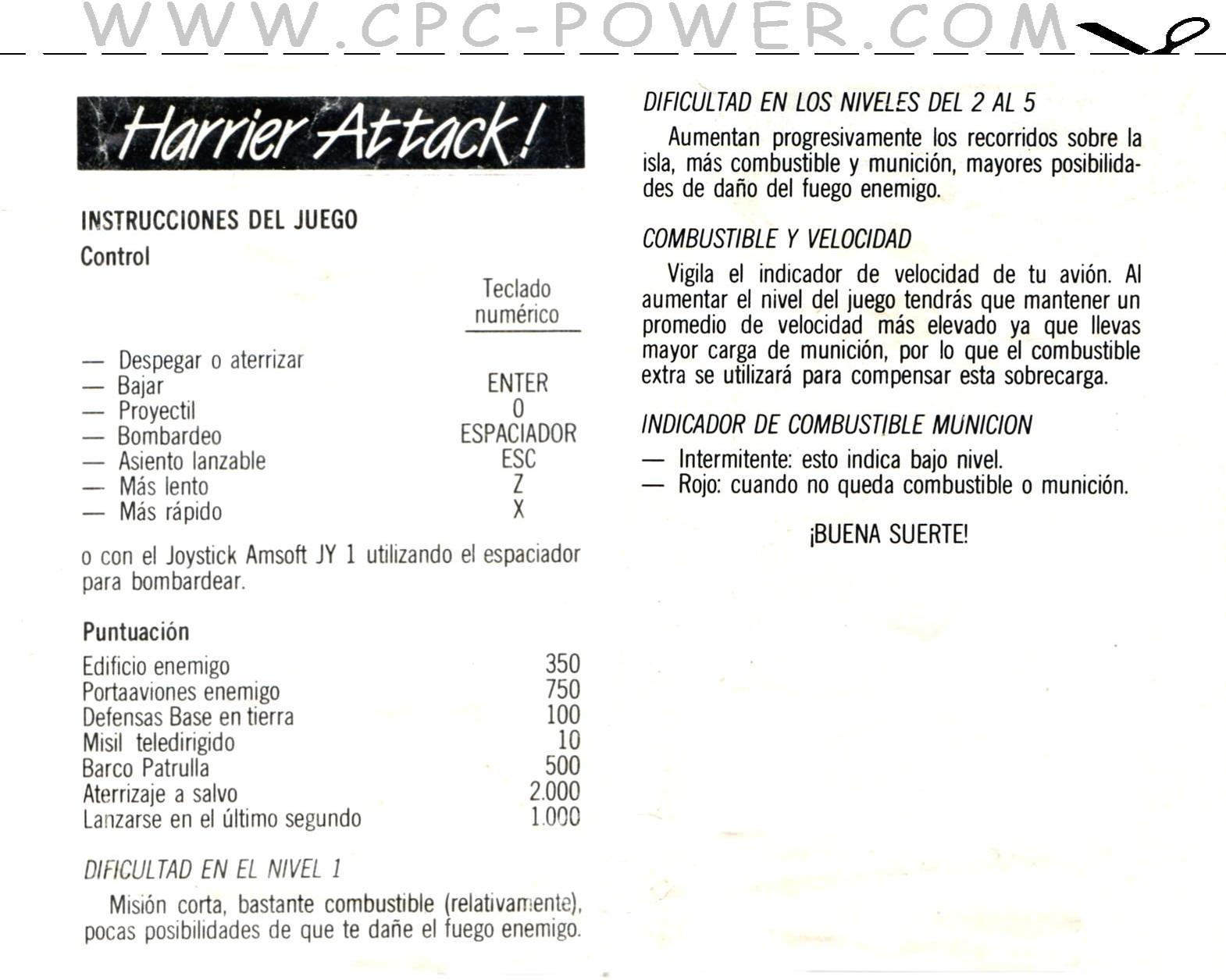 HARRIER ATTACK Introduction The aim of the game is to take-off from the aircraft carrier, and fly towards the enemy island. You will then have to speed-up your Harrier or it will run out of fuel before getting all the way over the island. You will also have to avoid the guided missile launched by the enemy patrol boat. You may fly faster, slower, higher or lower, but if you fly too high you will be detected by enemy jet fighters that will attack you with more guided missiles. You will also be under almost constant attack from landbased anti-aircraft fire. At skill level 1 you will be able to fly through most of this flak without damage, but at higher levels the chance of flak destroying your Harrier will greatly increase. You may attempt to shoot down the enemy planes and the land-based weapons with your short-range rocket fire, but if you do so you will have to immediately dodge out of the way of the explosion or your own plane will be damaged. You may also bomb the enemy artillery as you fly over the island, but be careful to keep enough bombs in reserve to wipe-out the enemy base. Having completed your mission you will have to fly back to your carrier and land before your fuel runs out. At any time during the game you may eject and abort the mission. If you eject just before your plane is destroyed then you will receive bonus points for saving your life. Loading Instructions Reset computer by holding down CTRL, SHIFT and ESC keys together in that order. Place cassette into the Datacorder. Rewind tape to beginning then press STOP/EJECT once. Press CTRL and small ENTER keys simultaneously then press PLAY followed by any key. this program will take about 5 minutes to load. Playing instructions will appear on the screen. AMSOFT JY1 Joystick compatible. PLAYING INSTRUCTIONS Controls Numerical Keyboard Take off & up Â· Down ENTER Fire Rocket Ã¸ Bomb Drop SPACE BAR Ejector Seat ESC Slower Z Faster X or AMSOFT JY1 Joystick using SPACE BAR for bombs. Score Enemy building 350 Enemy aircraft 750 Land-based weapons 100 Guided Missile 10 Patrol Boat 500 Safe landing 2000 Last second eject 1000 SKILL LEVEL 1 Short mission, relatively large amount of fuel, low chance of damage by enemy flak. SKILL LEVEL 2-5 Progressively longer sorties over the island, more fuel and ammunition, greater chance of damage from enemy flak. FUEL AND SPEED Watch your airspeed indicator (the bar-gauge at the bottom centre of your screen). As the skill level increases it is necessary to maintain higher average speeds, as you will be carrying a greater load of ammunition and your fuel surplus has to be used up to reduce your overall weight. As a rough guide half to three-quarters maximum speed should be enough to get you safely back to the carrier. FUEL AND AMMUNITION INDICATORS These record your use of fuel and weapons as you progress over the island. They will flash when at a low level, and then turn red when empty. Note that your bombs may be destroyed by the enemy flak while still in the air. GOOD LUCK! Â©COPYRIGHT DURELL SOFTWARE