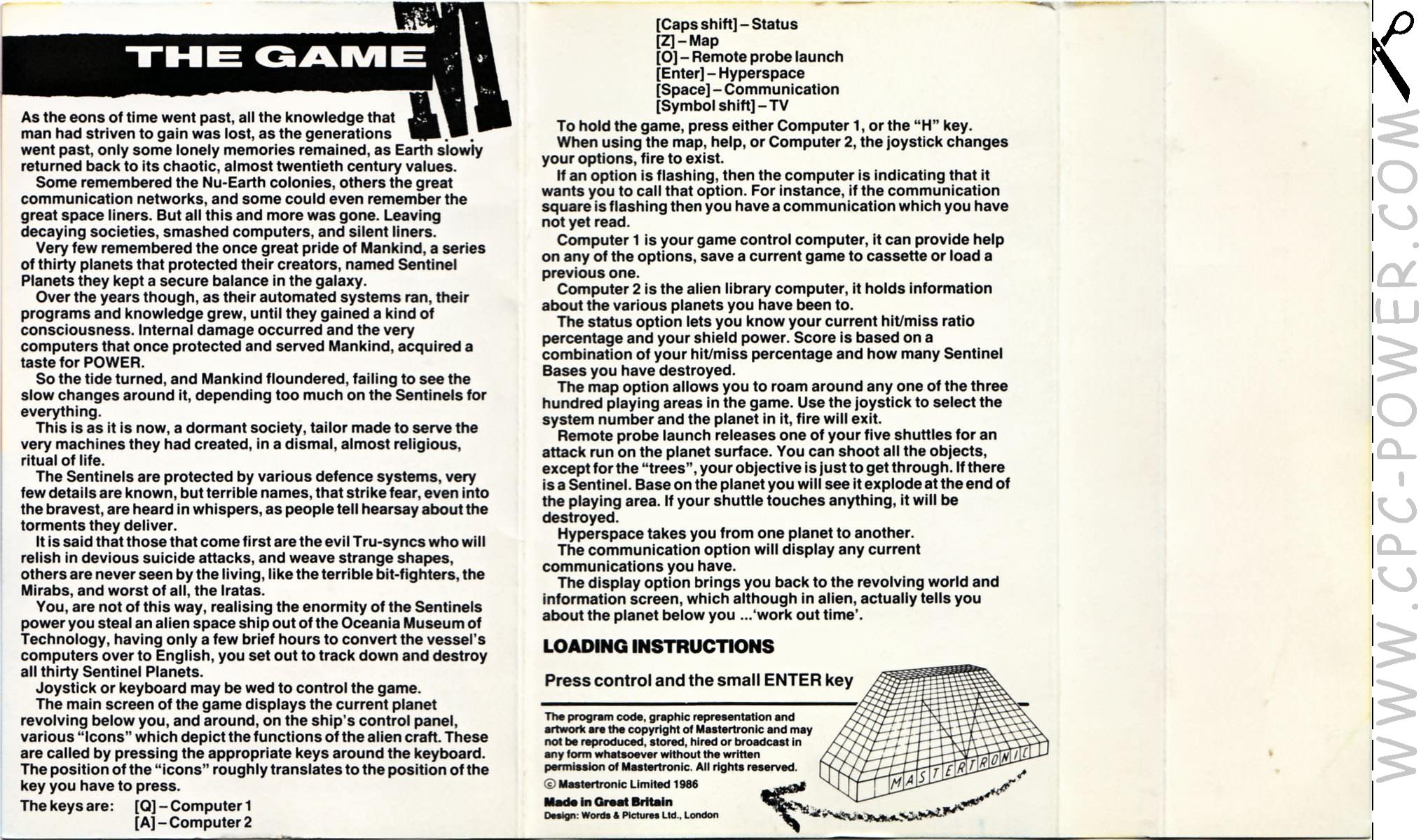 Pilot an alien spacecraft to battle with so intelligent 'planets'! Use your on-board computers to decode the clues and send in your fighters for a ground attack... Three hundred playing areas to tackle! Can you stand up to the challenge. JOYSTICK OR KEYBOARD --------------------------------------------------------------------------- THE GAME | --------------------------------------------------------------------------- As the eons of time went past, all the knowledge that man had striven to gain was lost, as the generations went past, only some lonely memories remained, as Earth returned back to its chaotic, almost twentieth century values. Some remembered the Nu-Earth colonies, others the great communication networks, and some could even remember the great space liners. But all this and more was gone. Leaving decaying societies, smashed computers, and silent liners. Very few remembered the once great pride of Mankind, a series of thirty planets that protected their creators, named Sentinel Planets they kept a secure balance in the galaxy. Over the years though, as their automated systems ran, their programs and knowledge grew, until they gained a kind of consciousness. Internal damage occurred and the very computers that once protected and served Mankind, acquired a taste for POWER. So the tide turned, and Mankind floundered, failing to see the slow changes around it, depending too much on the Sentinels for everything. This is as it is now, a dormant society, tailor made to serve the very machines they had created, in a dismal, almost religious, ritual of life. The Sentinels are protected by various defence systems, very few details are known, but terrible names, that strike fear, even into the bravest, are heard in whispers, as people tell hearsay about the torments they deliver. It is said that those that come first are the evil Tru-syncs who will relish in devious suicide attacks, and weave strange shapes, others are never seen by the living, like the terrible bit-fighters, the Mirabs, and worst of all, the Iratas. You, are not of this way, realising the enormity of the Sentinels power you steal an alien space ship out of the Oceania Museum of Technology, having only a few brief hours to convert the vessel's computers over to English, you set out to track down and destroy all thirty Sentinel Planets. Joystick or keyboard may be wed to control the game. The main screen of the game displays the current planet revolving below you, and around, on the ship's control panel, various "Icons" which depict the functions of the alien craft. These are called by pressing the appropriate keys around the keyboard. The position of the "icons" roughly translates to the position of the key you have to press. The keys are: [Q] - Computer 1 [A] - Computer 2 [Caps shift] - Status [Z] - Map [O] - Remote probe launch [Enter] - Hyperspace [Space] - Communication [Symbol shift] - TV To hold the game, press either Computer 1, or the "H" key. When using the map, help, or Computer 2, the joystick changes your options, fire to exist. If an option is flashing, then the computer is indicating that it wants you to call that option. For instance, if the communication square is flashing then you have a communication which you have not yet read. Computer 1 is your game control computer, it can provide help on any of the options, save a current game to cassette or load a previous one. Computer 2 is the alien library computer, it holds information about the various planets you have been to. The status option lets you know your current hit/miss ratio percentage and your shield power. Score is based on a combination of your hit/miss percentage and how many Sentinel Bases you have destroyed. The map option allows you to roam around any one of the three hundred playing areas in the game. Use the joystick to select the system number and the planet in it, fire will exit. Remote probe launch releases one of your five shuttles for an attack run on the planet surface. You can shoot all the objects, except for the "trees", your objective is just to get through. If there is a Sentinel. Base on the planet you will see it explode at the end of the playing area. If your shuttle touches anything, it will be destroyed. Hyperspace takes you from one planet to another. The communication option will display any current communications you have. The display option brings you back to the revolving world and information screen, which although in alien, actually tells you about the planet below you ...'work out time'. LOADING INSTRUCTIONS Press control and the small ENTER key ------------------------------------------------------------------------------- The program code, graphic representation and artwork are the copyright of Mastertronic and may not be reproduced, stored, hired or broadcast in any form whatsoever without the written permission of Mastertronic. All rights reserved. Â© Mastertronic Limited 1986 Made in Great Britain Design: Words & Pictures Ltd., London