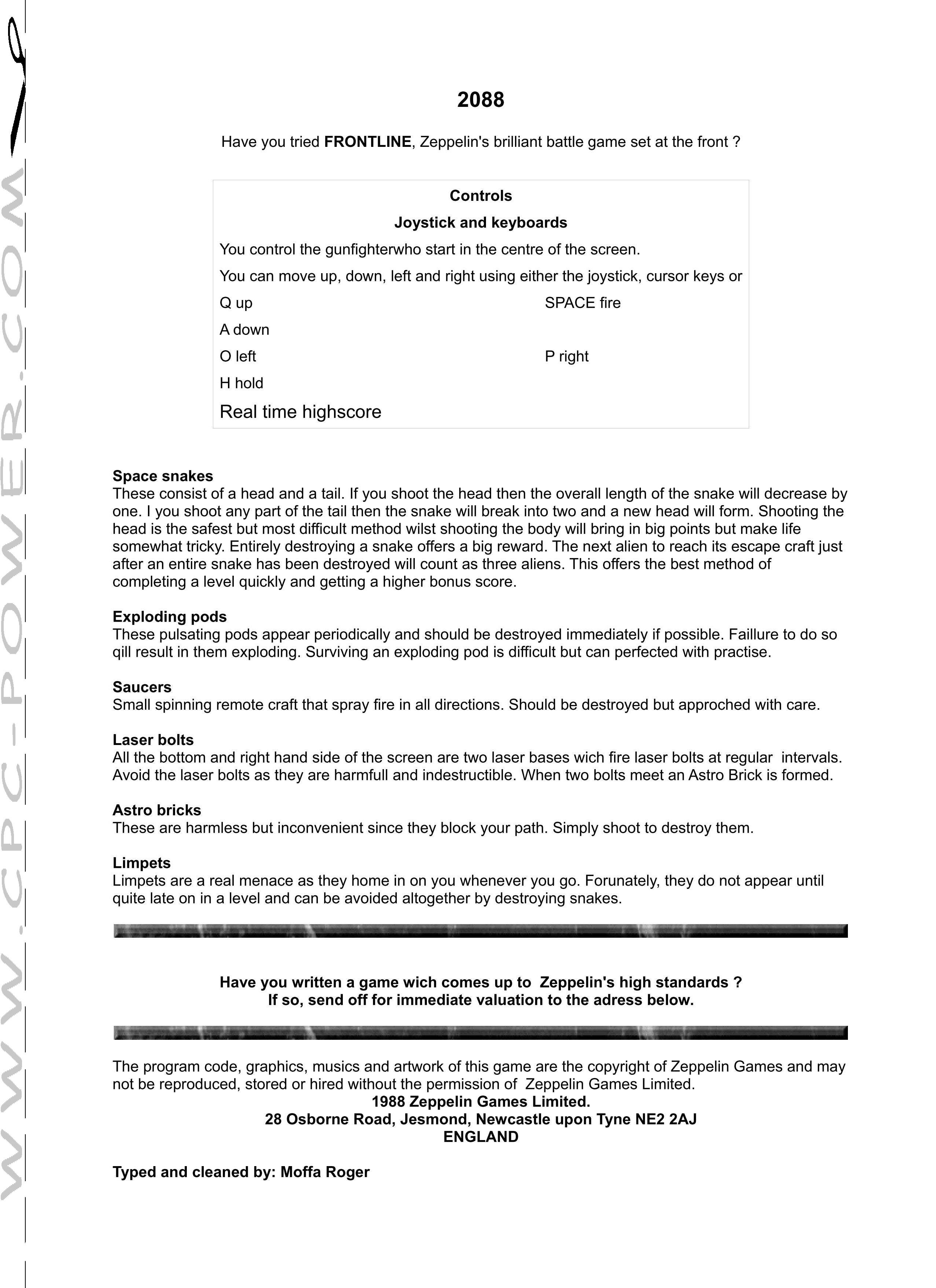 2 0 8 8 (c) 1988 Zeppelin Games Ltd. Amstrad/schneider ref : A029 AMSTRAD LOADING INSTRUCTIONS ---------------------------- RUN" A power hungry race of aliens has invaded a neighbouring planet but the invasion has gone drastically wrong. The aliens have decided to evacuate but have lost all their weapons and are now defenceless. As a member of the Interstellar Mercenary Organisation you help evacuate the aliens, protecting them as they head to their escape crafts. Your objective is to complet the game as quickly as possible without dying whilst accumulating as many points as possible. In the very center of the screen is a number. This is the number of aliens you must 'get home' to complete the level. Aliens appear at the perimeter of the playing area every few seconds and begin to head for one of the rescue craft near the center of the screen. The better you defend the aliens the quicker you will complete the level and the bigger will be the bonus that you receive. Bonus life every 20,000 points. CONTROLS -------- JOYSTICK AND KEYBOARD You control the gunfighter who starts in the center fo the screen. You can move up, down, left and right using either the joystick, cursor keys or Q up SPACE fire A down O left P right H hold Realtime high score SPACE SNAKES ------------ These consists of a head and a tail. If you shoot the head then the overall length of the snake will decrease by one. If you shoot any part of the tail then the snake will break into two and a new head will form. Shooting the head is the safest but mosr difficult method whilst shooting the body will bring in big points but make life somewhat tricky. Entirely destroying a snake offers a big reward. The next alien to reach its escape craft just after an entire snake has been destroyed will count as three aliens. This offers the best method of completing a level quickly and getting an higher bonus score. EXPLODING PODS -------------- These pulsating pods appear periodically and should be destroyed immediatly if at all possible. Failure to do so will result in them exploding. Surviving on exploding pods is difficult but can be perfected with practice. SAUCERS ------- Small spinning remote craft that spray fire in all directions. Should be destroyed but approached with care. LASER BOLTS ----------- At the bottom and right hand side of the screen are two laser bases which fire laser bolts at regular intervals. Avoid the laser bolts as they are harmful and indestrutibles. When the bolts meet an Astro Brick is formed. ASTRO BRICKS ------------ These are harmless but inconvenient since they block your path. Simply shoot to destroy them. LIMPETS ------- Limpets are a real menace as they home in on you wherever you go. Fortunately, they do not appear until quite late on in a level and can be avoided alltogether by destroying snakes. The program code, graphics, music and artworks of this game are the copyright of Zeppelin Games and may not be reproduces, stored or hired without the written permission of Zeppelin Games Limited. (c) 1988 Zeppelin Games Ltd. 28 Osborne Road, Jesmond, Newcastle upon Tyne NE2 2AJ