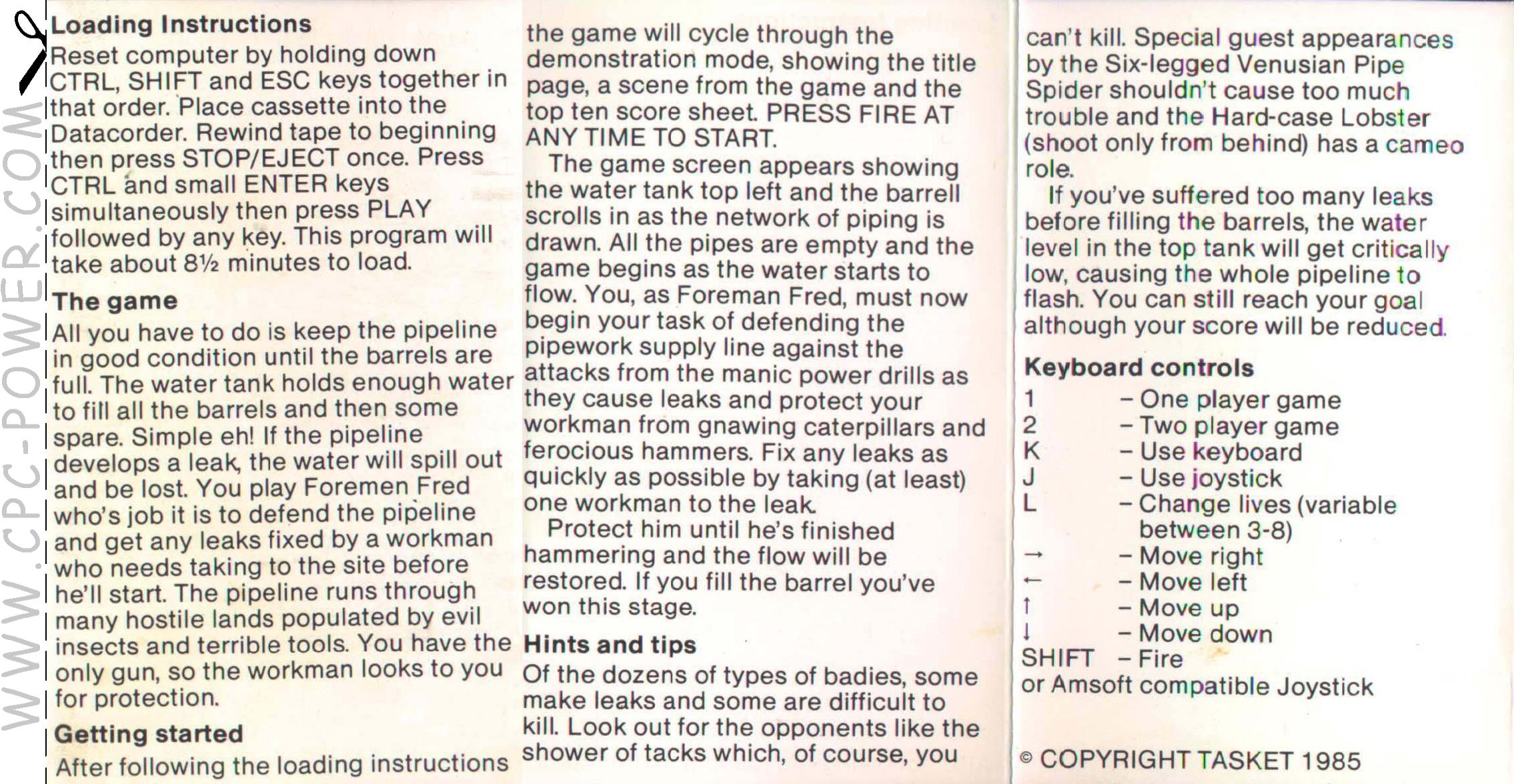 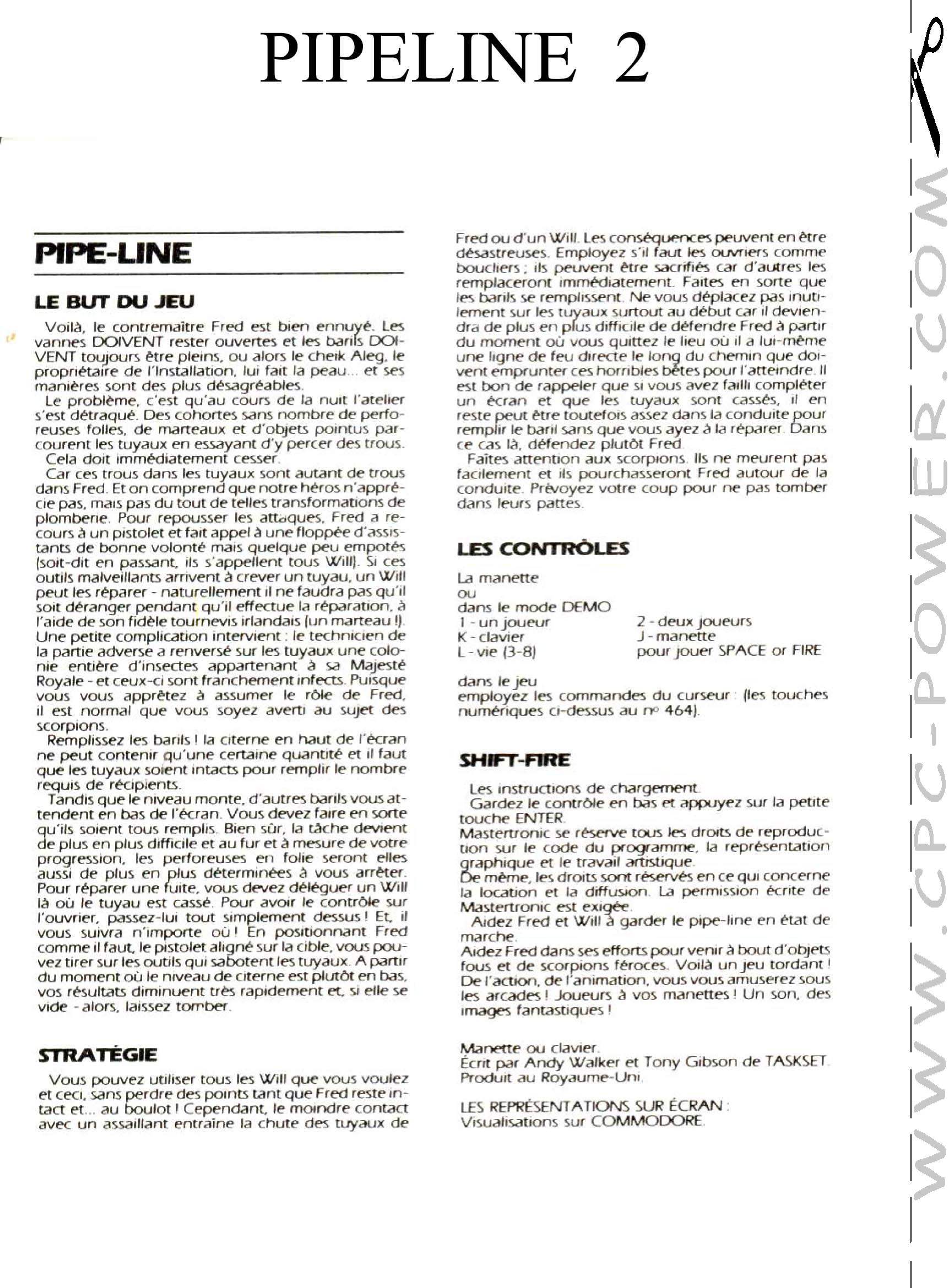 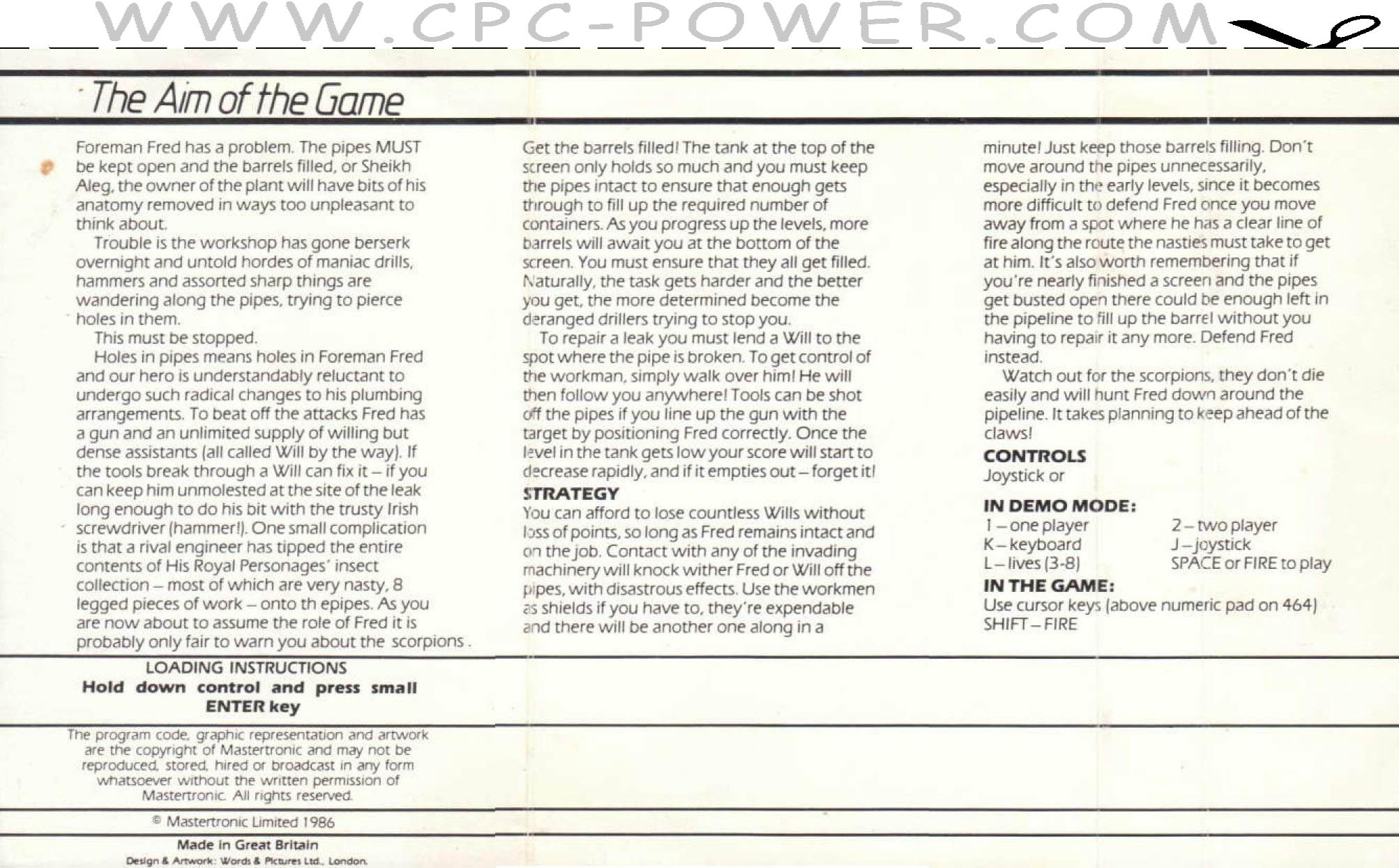 Loading Instructions Reset computer by holding down CTRL, SHIFT and ESC keys together in that order. Place cassette into the Datacorder. Rewind tape to beginning then press STOP/EJECT once. Press CTRL and small ENTER keys simultaneously then press PLAY followed by any key. This program will take about 8Â½ minutes to load. The game All you have to do is keep the pipeline in good condition until the barrels are full. The water tank holds enough water to fill all the barrels and then some spare. Simple eh! If the pipeline develops a leak, the water will spill out and be lost. You play Foreman Fred who's job it is to defend the pipeline and get any leaks fixed by a workman who needs taking to the site before he'll start. The pipeline runs through many hostile lands populated by evil insects and terrible tools. You have the only gun, so the workman looks to you for protection. Getting started After following the loading instructions the game will cycle through the demonstration mode, showing the title page, a scene from the game and the top ten score sheet. PRESS FIRE AT ANY TIME TO START. The game screen appears showing the water tank top left and the barrell scrolls in as the network of piping is drawn. All the pipes are empty and the game begins as the water starts to flow. You, as Foreman Fred, must now begin your task of defending the pipework supply line against the attacks from the manic power drills as they cause leaks and protect your workman from gnawing caterpillars and ferocious hammers. Fix any leaks as quickly as possible by taking (at least) one workman to the leak. Protect him until he's finished hammering and the flow will be restored. If you fill the barrel you've won this stage. Hints and tips Of the dozens of types of badies, some make leaks and some are difficult to kill. Look out for the opponents like the shower of tacks which, of course, you can't kill. Special guest appearances by the Six-legged Venusian Pipe Spider shouldn't cause too much trouble and the Hard-case Lobster (shoot only from behind) has a cameo role. If you've suffered too many leaks before filling the barrels, the water level in the top tank will get critically low, causing the whole pipeline to flash. You can still reach your goal although your score will be reduced. Keyboard controls 1 - One player game 2 - Two player game K - Use keyboard J - Use joystick L - Change lives (variable between 3-8) Right arrow - Move right Left arrow - Move left Up arrow - Move up Down arrow - Move down SHIFT - Fire or Amsoft compatible Joystick Â© COPYRIGHT TASKET 1985