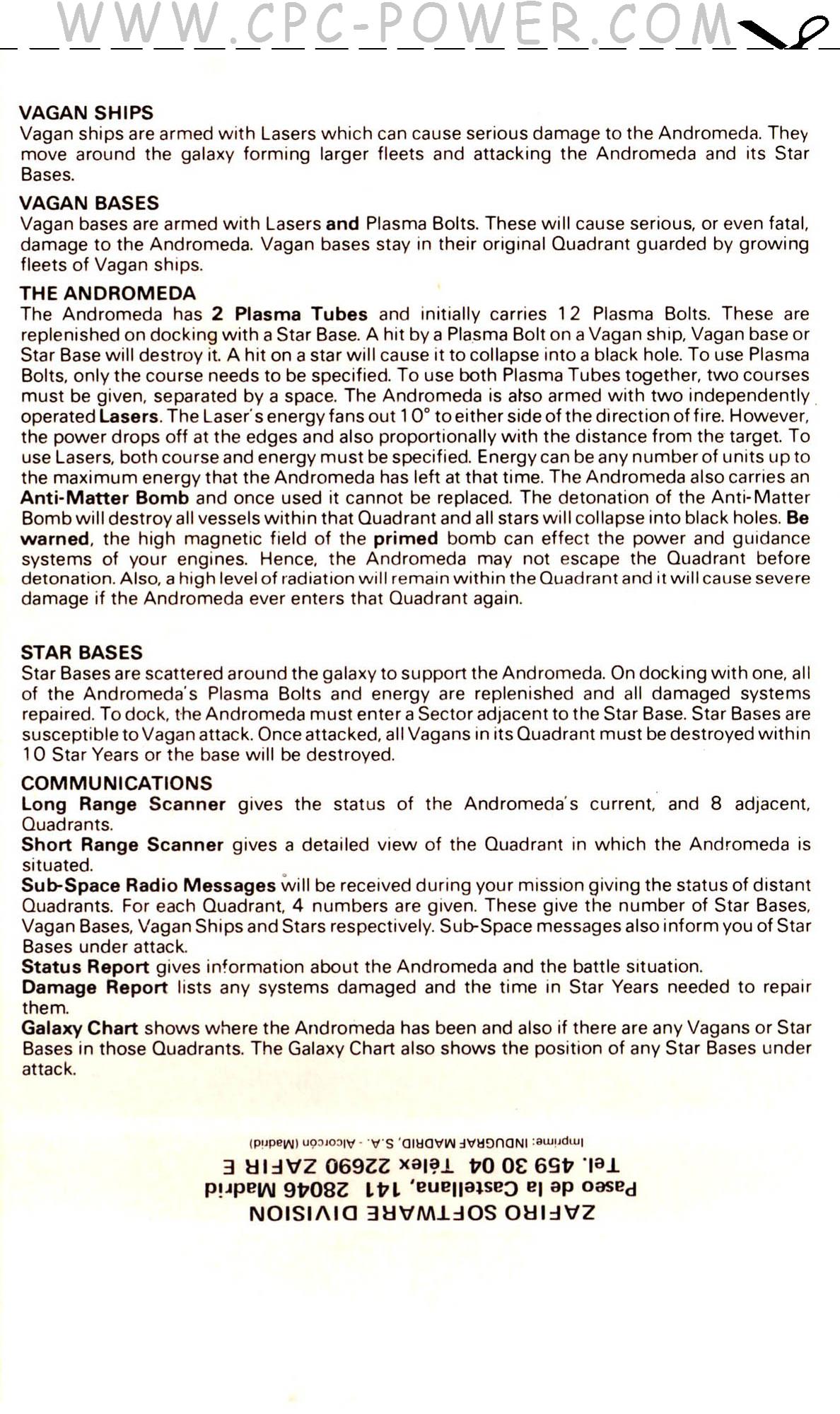 INSTRUCTIONS The following commands are available to you, the Captain of the Andromeda, in your fight against the Vagan attackers: IO = Ion Drive TE = Tetron Drive LA = Lasers PL = Plasma Bolts AN = Anti-Matter Bomb GA = Galaxy Chart ST = Status Report DA = Damage Report LO = Long Range Scanner SH = Short Range Scanner AB = Abort (Engine or Weapon Command) TIME Each Star Year is equal to 20 seconds of game time. THE GALAXY The galaxy is divided into 64 Quadrants, each of which is divided into 64 Sectors. VAGAN SHIPS Vagan ships are armed with Lasers which can cause serious damage to the Andromeda. They move around the galaxy forming larger fleets and attacking the Andromeda and its Star Bases. VAGAN BASES Vagan bases are armed with Lasers and Plasma Bolts. These will cause serious, or even fatal, damage to the Andromeda. Vagan bases stay in their original Quadrant guarded by growing fleets of Vagan ships. THE ANDROMEDA The Andromeda has 2 Plasma Tubes and initially carries 12 Plasma Bolts. These are replenished on docking with a Star Base. A hit by a Plasma Bolt on a Vagan ship, Vagan base or Star Base will destroy it. A hit on a star will cause it to collapse into a black hole. To use Plasma Bolts, only the course needs to be specified. To use both Plasma Tubes together, two courses must be given, separated by a space. The Andromeda is also armed with two independently operated Lasers. The Laserâs energy fans out 10Â° to either side of the direction of fire. However, the power drops off at the edges and also proportionally with the distance from the target. To use Lasers, both course and energy must be specified. Energy can be any number of units up to the maximum energy that the Andromeda has left at that time. The Andromeda also carries an Anti-Matter Bomb and once used it cannot be replaced. The detonation of the Anti-Matter Bomb will destroy all vessels within that Quadrant and all stars will collapse into black holes. Be warned, the high magnetic field of the primed bomb can effect the power and guidance systems of your engines. Hence, the Andromeda may not escape the Quadrant before detonation. Also, a high level of radiation will remain within the Quadrant and it will cause severe damage if the Andromeda ever enters that Quadrant again. STAR BASES Star Bases are scattered around the galaxy to support the Andromeda. On docking with one, all of the Andromedaâs Plasma Bolts and energy are replenished and all damaged systems repaired. To dock, the Andromeda must enter a Sector adjacent to the Star Base. Star Bases are susceptible to Vagan attack. Once attacked, all Vagans in its Quadrant must be destroyed within 10 Star Years or the base will be destroyed. COMMUNICATIONS Long Range Scanner gives the status of the Andromedaâs current, and 8 adjacent, Quadrants. Short Range Scanner gives a detailed view of the Quadrant in which the Andromeda is situated. Sub-Space Radio Messages will be received during your mission giving the status of distant Quadrants. For each Quadrant, 4 numbers are given. These give the number of Star Bases, Vagan Bases, Vagan Ships and Stars respectively. Sub-Space messages also inform you of Star Bases under attack. Status Report gives information about the Andromeda and the battle situation. Damage Report lists any systems damaged and the time in Star Years needed to repair them. Galaxy Chart shows where the Andromeda has been and also if there are any Vagans or Star Bases in those Quadrants. The Galaxy Chart also shows the position of any Star Bases under attack. This programme and artwork are the copyright of Atlantis Software Limited. Copying, hiring, lending or public performance is prohibited. If you have written a good programme and would like to discuss marketing, please write to: Atlantis Software Limited 19 Prebend Street, London N1 8PF