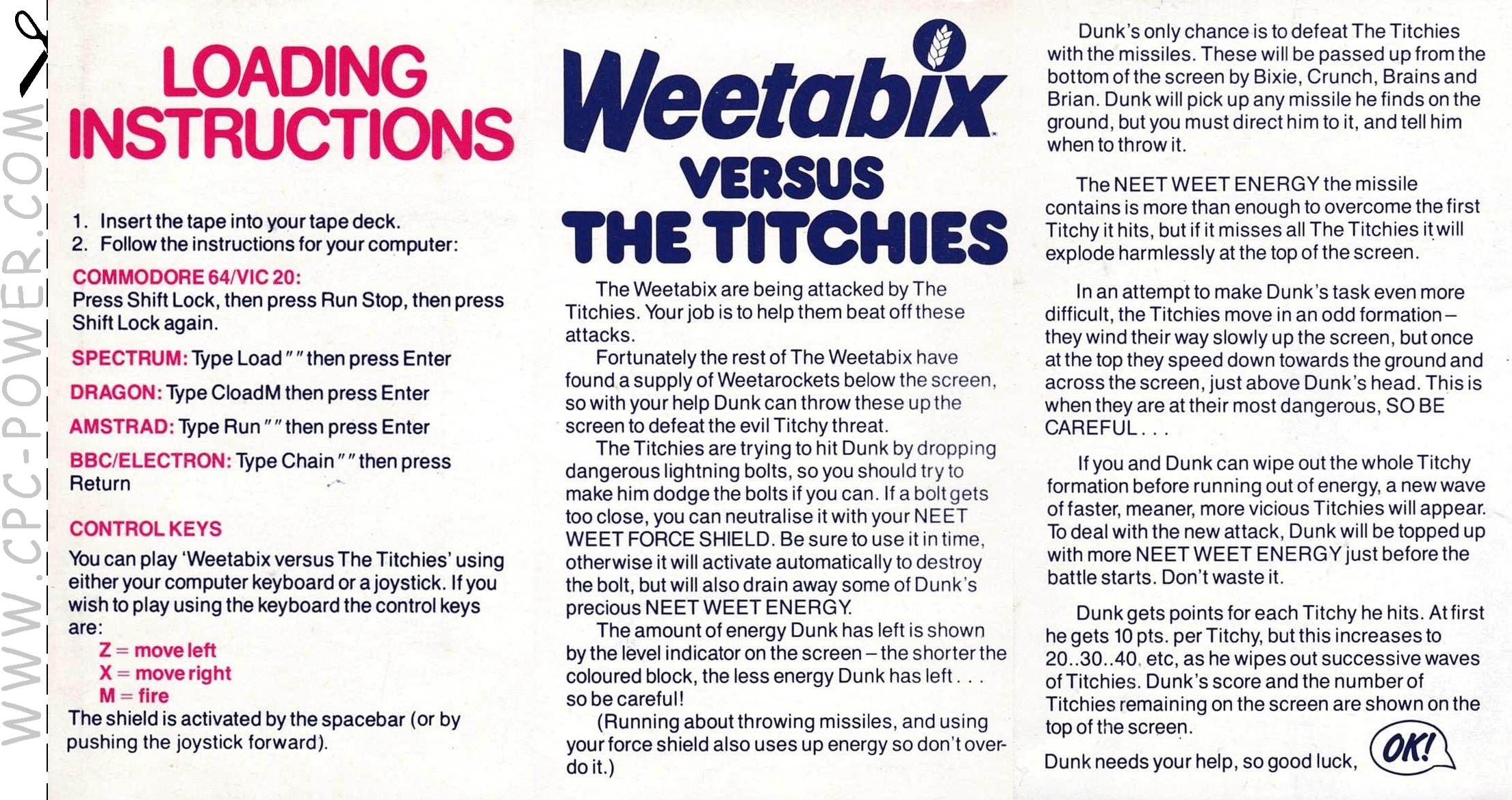 Weetabix VERSUS THE TITCHIES You'll enjoy many hours of fun playing this unique new computer game especially produced for Weetabix by Romik LOADING INSTRUCTIONS 1. Insert the tape into yourtape deck. 2. Follow the instructions for your computer: COMMODORE 64/VIC 20: Press Shift Lock, then press Run Stop, then press Shift Lock again. SPECTRUM: Type Load " "then press Enter DRAGON: Type CloadM then press Enter AMSTRAD: Type Run"" then press Enter BBC/ELECTRON:Type Chain "" then press Return CONTROL KEYS You can play 'Weetabix versus The Titchies' using either your computer keyboard or a joystick. If you wish to play using the keyboard the control keys are: Z = move left ,X = move right M = fire The shield is activated by the spacebar (or by pushing the joystick forward). The Weetabix are being attacked by The Titchies. Your job is to help them beal off these attacks. Fortunately the rest ol The Weetabix have found a supply of Weetarockets below the screen, so with your help Dunk can throw these up the screen to defeat the evil Titchy threat. The Titchies are trying to hit Dunk by dropping dangerous lightning bolts, so you should try to make him dodge the bolts if you can. If a bolt gets too close, you can neutralise It with your NEET WEET FORCE SHIELD. Be sure to use it in time, otherwise it will activate automatically to desiroy the bolt, but will also drain away some of Dunk's precious NEET WEET EMERGY. The amount of energy Dunk has left is shown by the level indicator on the screen - the shorter the coloured block, the less energy Dunk has left. . . so be careful (Running about throwing missiles, and using your force shield also uses up energy so don't over do it.) Dunk's only chance is to defeat The Titchies with lhe missiles. These will be passed up from the bottom of the screen by Bixie, Crunch, Brains and Brian. Dunk will pick up any missile he finds on the ground, but you must direct him to it, and tell him when to throw it. The NEET WEET EMERGY the missile contains is more than enough to overcome the first Tilchy it hits, but if it misses all The Titchies it will explode harmlessly at the top of the screen. In an attempt to make Dunk's task even more difficult, the Titchles move in an odd formation - they wind their way slowly up the screen, but once at the top they speed down towards the ground and across the screen, Just above Dunk's head. This is when they are at their most dangerous, SO BE CAREFUL... If you and Dunk can wipe out the whole Titchy formation before running out of energy, a new wave of faster, meaner, more vicious Titchies will appear. To deal with the new attack, Dunk will be topped up with more NEET WEET ENERGY just before the battle starts. Don't waste it. Dunk gets points for each Titchy he hits. At first he gets 10 pts. per TItchy, but this Increases to 20..30..40, etc, as he wipes out successive waves of Titchies. Dunk's score and the number of Titchies remaining on the screen are shown on the top of the screen. Dunk needs your help, so good luck, OK!