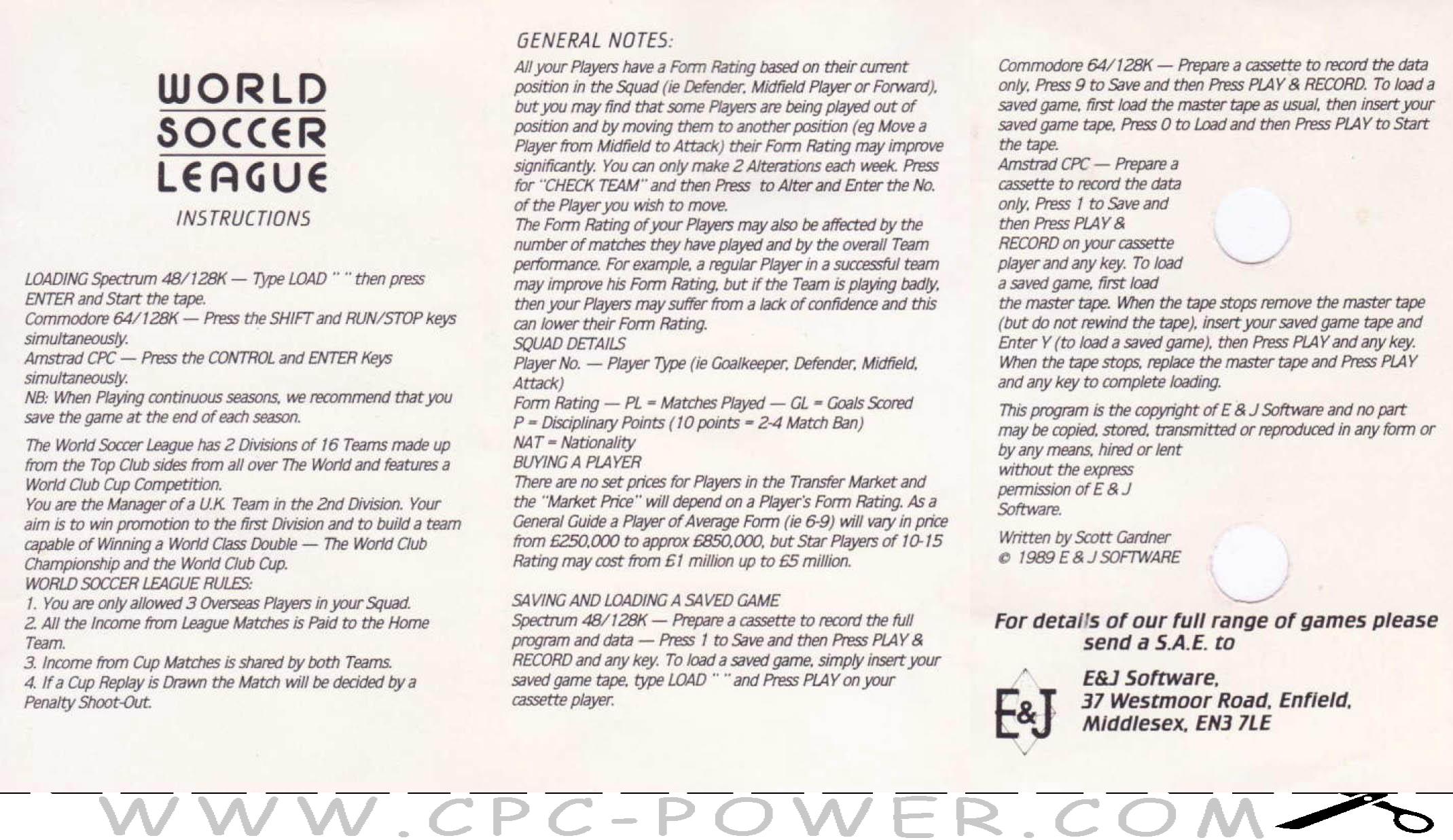 WORLD SOCCER LEAGUE The World Soccer League has 2 Divisions of 16 Teams made up from the Top Club sides from all over The World and features a World Club Cup Competition. You are the Manager of a U.K. Team in the 2nd Division. Your aim is to win promotion to the first Division and to build a team capable of Winning a World Class Double - The World Club Championship and the World Club Cup. WORLD SOCCER LEAGUE RULES: 1. You are only allowed 3 Overseas Players in your Squad. 2. All the Income from League Matches is Paid to the Home Team. 3. Income from Cup Matches is shared by both Teams. 4. If a Cup Replay is Drawn the Match will be decided by a Penalty Shoot-Out with each Team taking 5 Penalties. If the Penalty Shoot-Out is Drawn there will be Sudden-Death Penalties to decide the Winner. GENERAL NOTES: All your Players have a Form Rating based on their current position in the Squad (ie Defender, Midfield Player or Forward), but you may find that some Players are being played out of position and by moving them to another position (eg Move a Player from Midfield to Attack) their Form Rating may improve significantly. You can only make 2 Alterations each week. Press C for "CHECK TEAM" and then Press A to Alter and Enter the No. of the Player you wish to move. The Form Rating of your Players may also be affected by the number of matches they have played and by the overall Team performance. For example, a regular Player in a successful Team may improve his Form Rating, but if the Team is playing badly, then your Players may suffer from a lack of confidence and this can lower their Form Rating. SQUAD DETAILS Player No. - Player Type (ie Goalkeeper, Defender, Midfield, Attack) Form Rating - PL = Matches Played - GL = Goals Scored P = Disciplinart Points (10 points - 2- 4 Match Ban) NAT = Nationality BUYING A PLAYER There are no set prices for Players in the Transfer Market and the "Market Price" will depend on a Player's Form Rating. As a General Guide a Player of Average Form (ie 6-9) will vary in price from Â£250,000 to approx Â£850,000, but Star Players of 10-15 Rating may cost from Â£1 million up to Â£5 million. SAVE GAME - Menu Option 1 Prepare a Cassette to Record - Press PLAY & RECORD on your cassette player and then Press ANY KEY. To Load a Saved Game, simply Insert your Saved Game Tape and type LOAD"" and then Press Enter and Press PLAY on your cassette player. This program is the copyright of E & J Software and no part may be copied, stored, transmitted or reproduced in any form or by any means, hired or lent without the express persmission of E & J Software. Written by Scott Gardner Â© 1989 E & J SOFTWARE For details of our full range of games please send a S.A.E. to E&J Software, 37 Westmoor Road, Enfield, Middlesex, EN3 7LE