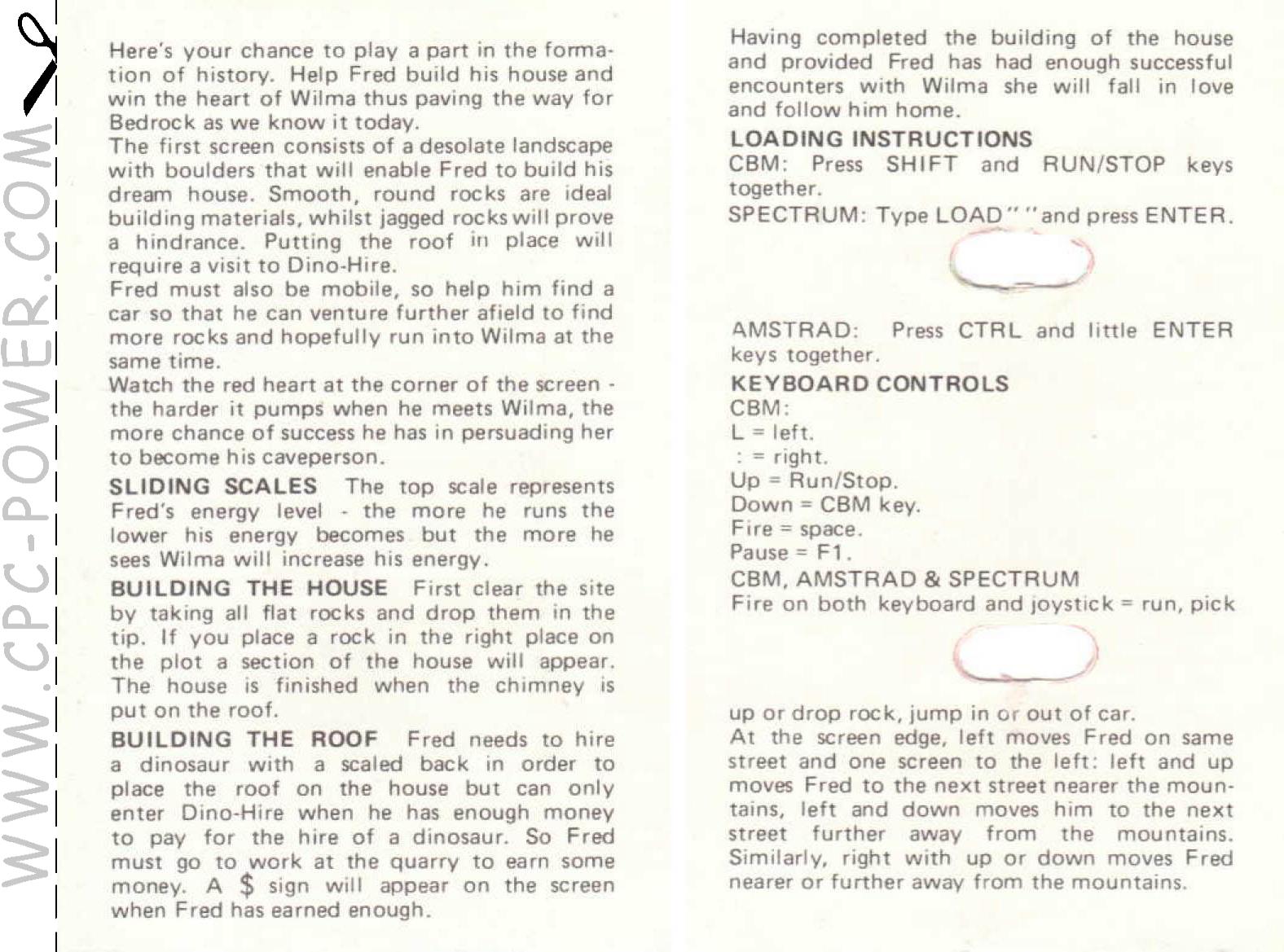 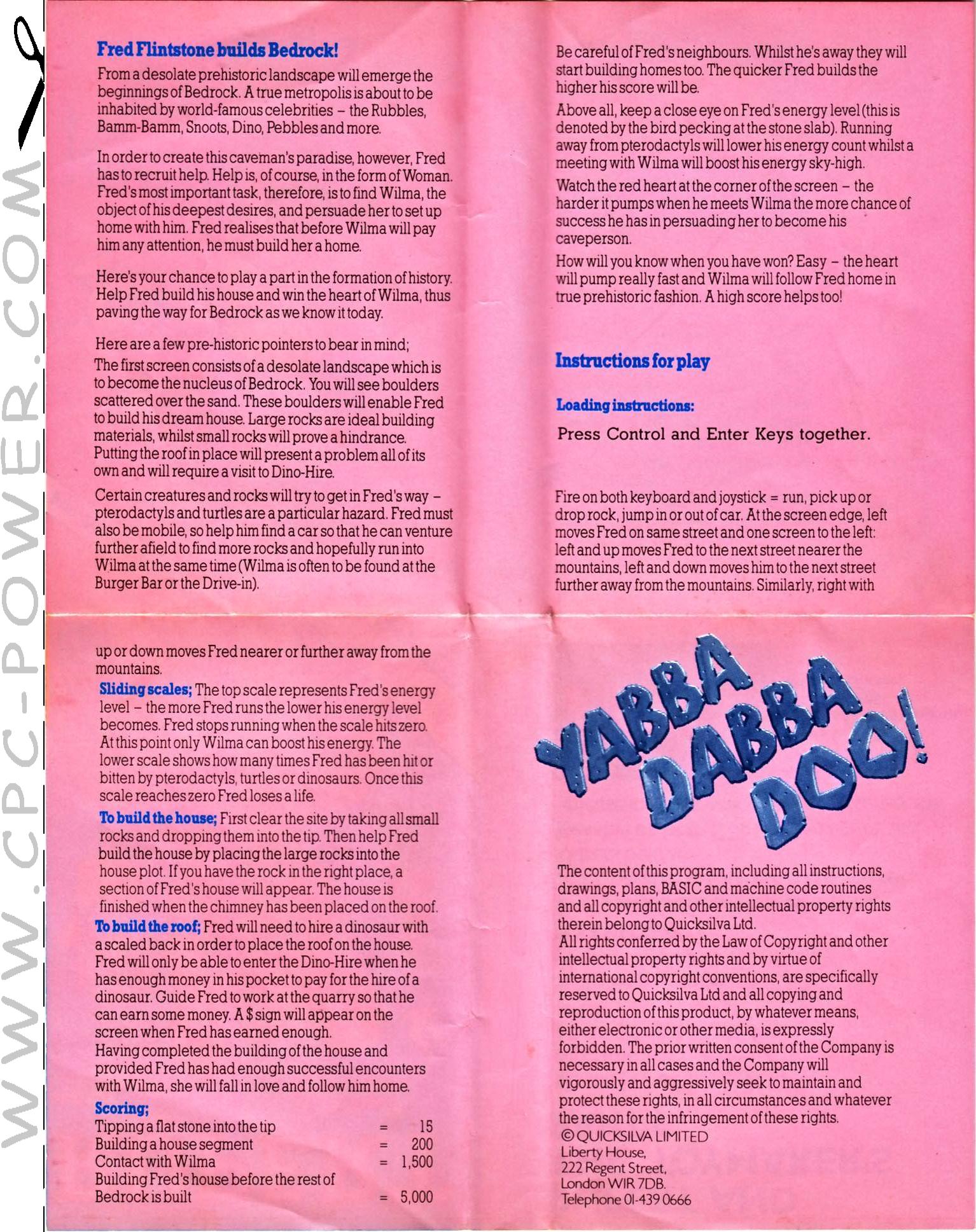 Fred Flintstone builds Bedrock! From a desolate prehistoric landscape will emerge the beginnings of Bedrock. A true metropolis is about to be inhabited by world-famous celebrities - the Rubbles, Bamm-Bamm, Snoots, Dino, Pebbles and more. In order to create this caveman's paradise, however, Fred has to recruit help. Help is, of course, in the form of Woman. Fred's most important task, therefore, is to find Wilma, the object of his deepest desires, and persuade her to set up home with him. Fred realises that before Wilma will pay him any attention, he must build her a home. Here's your chance to play a part in the formation of history. Help Fred build his house and win the heart of Wilma, thus paving the way for Bedrock as we know it today. Here are a few pre-historic pointers to bear in mind; The first screen consists of a desolate landscape which is to become the nucleus of Bedrock. You will see boulders scattered over the sand. These boulders will enable Fred to build his dream house. Large rocks are ideal building materials, whilst small rocks will prove a hindrance. Putting the roof in place will present a problem all of its own and will require a visit to Dino-Hire. Certain creatures and rocks will try to get in Fred's way - pterodactyls and turtles are a particular hazard. Fred must also be mobile, so help him find a car so that he can venture further afield to find more rocks and hopefully run into Wilma at the same time (Wilma is often to be found at the Burger Bar or the Drive-in). Be careful of Fred's neighbours. Whilst he's away they will start building homes too. The quicker Fred builds the higher his score will be. Above all, keep a close eye on Fred's energy level (this is denoted by the bird pecking at the stone slab). Running away from pterodactyls will lower his energy count whilst a meeting with Wilma will boost his energy sky-high. Watch the red heart at the corner of the screen - the harder it pumps when he meets Wilma the more chance of success he has in persuading her to become his caveperson. How will you know when you have won? Easy - the heart will pump really fast and Wilma will follow Fred home in true prehistoric fashion. A high score helps too! Instructions for play Loading instructions: Press Control and Enter Keys together. Fire on both keyboard and joystick = run, pick up or drop rock, jump in or out of car. At the screen edge, left moves Fred on same street and one screen to the left: left and up moves Fred to the next street nearer the mountains, left and down moves him to the next street further away from the mountains. Similarly, right with up or down moves Fred nearer or further away from the mountains. Sliding scales; The top scale represents Fred's energy level - the more Fred runs the lower his energy level becomes. Fred stops running when the scale hits zero. At this point only Wilma can boost his energy. The lower scale shows how many times Fred has been hit or bitten by pterodactyls, turtles or dinosaurs. Once this scale reaches zero Fred loses a life. To build the house; First clear the site by taking all small rocks and dropping them into the tip. Then help Fred build the house by placing the large rocks into the house plot. If you have the rock in the right place, a section of Fred's house will appear. The house is finished when the chimney has been placed on the roof. To build the roof; Fred will need to hire a dinosaur with a scaled back in order to place the roof on the house. Fred will only be able to enter the Dino-Hire when he has enough money in his pocket to pay for the hire of a dinosaur. Guide Fred to work at the quarry so that he can earn some money. A $ sign will appear on the screen when Fred has earned enough. Having completed the building of the house and provided Fred has had enough successful encounters with Wilma, she will fall in love and follow him home. Scoring; Tipping a flat stone into the tip = 15 Building a house segment = 200 Contact with Wilma = 1,500 Building Fred's house before the rest of Bedrock is built = 5,000 Y A B B A D A B B A D O O ! The content of this program, including all instructions, drawings, plans, BASIC and machine code routines and all copyright and other intellectual property rights therein belong to Quicksilva Ltd. All rights conferred by the Law of Copyright and other intellectual property rights and by virtue of international copyright conventions, are specifically reserved to Quicksilva Ltd and all copying and reproduction of this product, by whatever means, either electronic or other media, is expressly forbidden. The prior written consent of the Company is necessary in all cases and the Company will vigorously and aggressively seek to maintain and protect these rights, in all circumstances and whatever the reason for the infringement of these rights. Â© QUICKSILVA LIMITED Liberty House, 222 Regent Street, London W1R 7DB. Telephone 01-439 0666