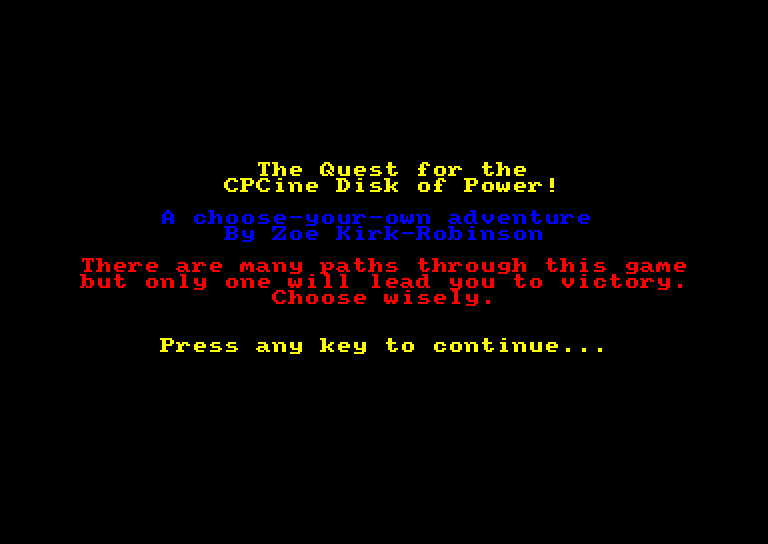 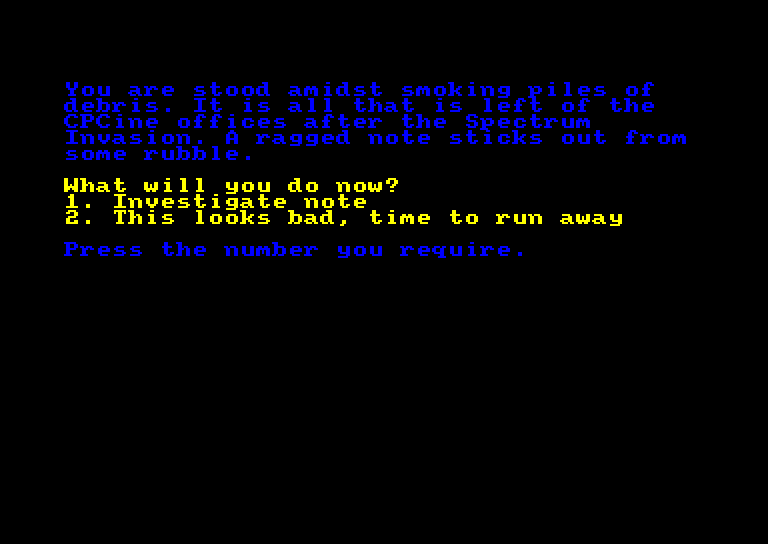 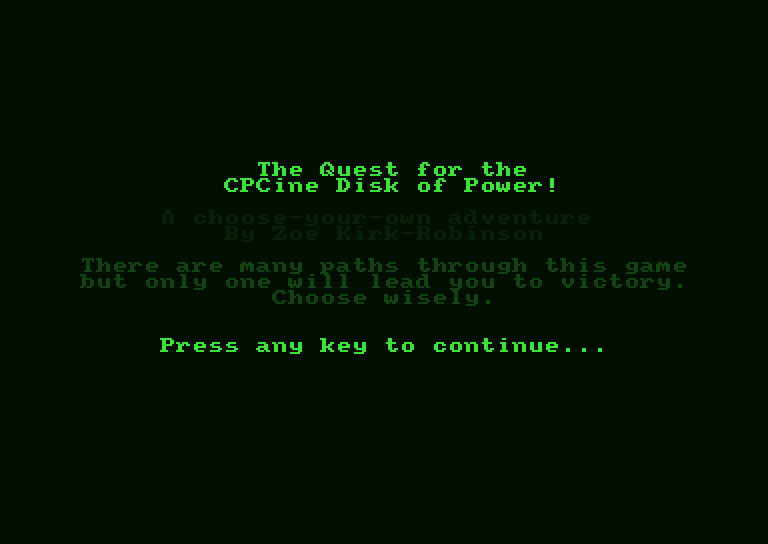 - CATEGORIES -
GAME -> Adventure
- NUMBER OF PLAYERS -
1 player
- DESCRIPTION -
The Quest for the CPCine Disk of Power! is a short, comedic choose-your-own-adventure style game written in BASIC by Zoe KIRK-ROBINSON. The game was released to accompany the release of episode 7 of CPCine: The Amstrad CPC Video Magazine.

The objective of the game is to recover the missing CPCine Disk of Power in order to thwart the machinations of the invading ZX Spectrum Army. The player achieves this by successfully navigating through a series of multiple choice points in the game's narrative. The entire game is played through multiple paragraphs of text, each accompanied by a choice; with the next paragraph detailing the outcome of that choice.

The game features several ways to fail and only one way to win.

Programming
The game is coded in BASIC using a simple game loop that checks for specific keypresses and executes one of a limited number of results based on the keypress detected. The narrative; the possible player choices; and the results of those choices are all held in DATA statements in the game code.

The game is designed to be simple to modify and use for other stories. By combining the simple game loop with BASIC's ability to read data from a separate file, it would be possible to expand the game or replace the entire game narrative with a new one without having to expand on the original game's main code at all.

- MISC -
CPCine is a documentary magazine show charting the life of the Amstrad CPC and Amstrad Plus ranges of computers, from the CPC's launch in 1984 to the eventual demise of the final CPC magazine, Amstrad Action, in the Nineties. Created, written and produced by Zoe KIRK-ROBINSON, episodes are released every two weeks on YouTube.

The show is split into several sections and seeks to cover one month in the life of the Amstrad computers in each episode (although episode 1 covers two months due to the delay between the launch of the CPC and the release of the first CPC magazine). Topics covered include: News, game reviews, serious application discussions, programming tips, hardware reviews, type-in discussions, demo assessments, and a variety of special features. The show seeks to maintain a balance between serious topics and gaming.