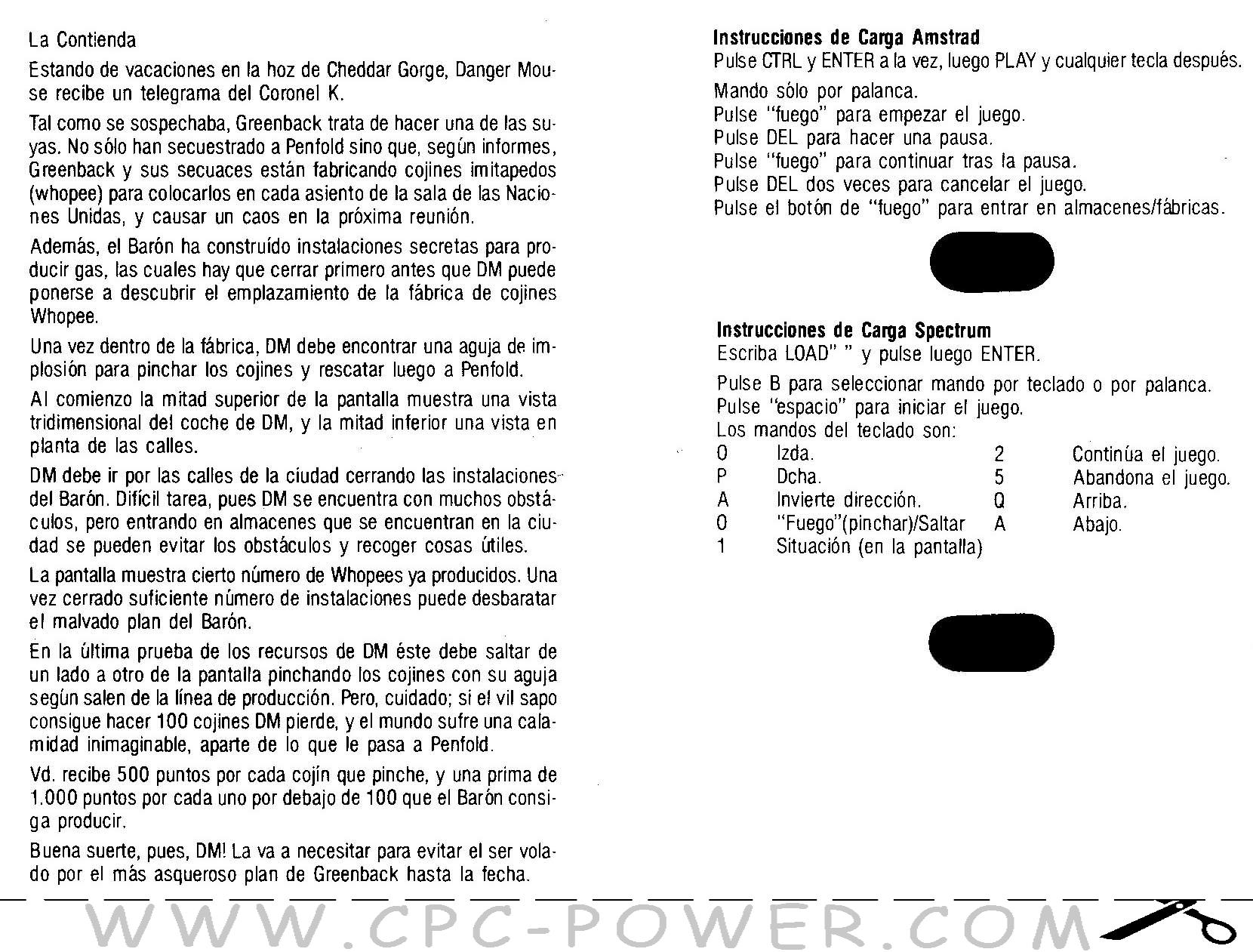 DANGER MOUSE -in- Making Whoopee (Creative Sparks / Sparklers) Danger Mouse is in the middle of a well-earned holiday - he has taken a little Cottage Cheese in the Cheddar Gorge and is thoroughly enjoying the rest. However, something has been grating on his mind, all is not well; and his suspicions are confirmed when a knock at the door announces the arrival of a telegram from Colonel K, Head of Security. It's bad news all right; Colonel K has just got wind of Greenback's latest scheme. Penfold has been kidnapped by Baron Greenback and is being held captive. According to intelligence reports, Greenback is masterminding the greatest threat yet to the safety of the world. Right at this moment the Baron and his henchmen are busy manufacturing enough whoopee cushions to cover every seat in the U.N., thus causing so much chaos at the next meeting that Greenback can achieve his dream of world domination. "Oh No!", groans Danger Mouse, "After Double Trouble, this looks like Bubble Trouble!". The Baron's factory is located in Chicago, the windy city. In addition, the dastardly toad has built secret gas manufacturing plants and a number of electricity stations throughout the city. Single-handed, Danger Mouse must shut down these plants, then discover the secret location of the whoopee cushion factory. Once there, he must get hold of a Pointed Imploding Needle (P.I.N.), to puncture the cushions before they are shipped to the U.N., and, of course, rescue poor old Penfold. Will Danger Mouse deflate the inflated, or will the U.N. end up in a raspberry surprise ???? Will Danger Mouse save the seat of power, or will it blow up in his face ???? Could this be the next re-make of "Gone with the Wind" ???? Play "Making Whoopee" and find out! THE GAME PLAY When the game starts, you will see a screen which is divided into two halves. The top half shows a 3D view from Danger Mouse's car as he travels through the city. The bottom half contains a plan view of the streets. DM must travel the city, locating the Baron's many gas factories and electricity generating stations. Only by shutting these down can he hope to foil the Baron's dastardly plot. However, as he drives along, he will encounter many strange obstacles in his way - the Toll Troll, a clock with only one hand, and many more. Our ever-resourceful hero can pass these barriers only by entering one of the many store-rooms to be found in the city. A store-room will usually contain something useful, but you'll only find out what you've got when you've found the way out, and it's not as easy as it looks! While Danger Mouse is puzzling over these problems, the Baron is making whoopee - sorry, whoopees; you'll see on your screen the number he's made so far. His gas factories and electricity stations come in a variety of shapes and sizes. Some are easy, but watch out for some tricky ones along the way. If you shut down enough of them, you'll find that the Baron's whoopee manufacturing capacity is impaired to the point where you can foil his evil plan. However, if you don't, you'll find that, when you eventually make it through to the Whoopee Cushion factory, popping them is not an easy task. In the final test of DM's resourcefulness, he must leap across the screen, popping the whoopees as they come off the production line with his P.I.N.. But beware, if the villainous toad succeeds in making 100 cushions, Danger Mouse loses, and the world suffers a fate too awful to contemplate, not to mention what happens to Penfold. You'll get 500 points for every cushion you burst, and a 1000-point bonus for every one less than 100 the Baron produces. So good luck, DM - you'll need it, to avoid being blown away by Greenback's foulest scheme yet! CONTROLS On completion of loading the title screen will be displayed. Press B to select either keyboard control or the required joystick. Press SPACE to start the game. The keyboard controls are as follows: O Left Q Up P Right A Down A Reverse Direction 0 Fire/Jump 1 Status Screen 2 Continue Game 5 Abandon Game [The 'A' key appears to have conflicting uses, but that's what it] [says on the inlay. JimG] "Danger Mouse" (c) 1982 Cosgrove Hall Productions (c) 1985 Creative Sparks Distribution Co. Ltd.